Democratic Minnesota Representative Ilhan Omar gave what seemed to be a full-on battle cry against President Donald Trump and our Capitalist system, during an endorsement for presidential representative Bernie Sanders in Minneapolis, Minnesota on Wednesday evening.

Trending: McCarthy Drops Bomb And Says Democrats Are Willing To FLIP On Impeachment Against President Trump

Omar stated that we need a “mass movement of the working class” in order to take Trump out of the White House and put an end to what Omar called “Western imperialism.” The crowd buzzed with chants of “Lock him up!” and various comments in support of the Green New Deal.

“I am excited for President Bernie Sanders!” Omar summarized as loud rock music filled the University of Minnesota venue. 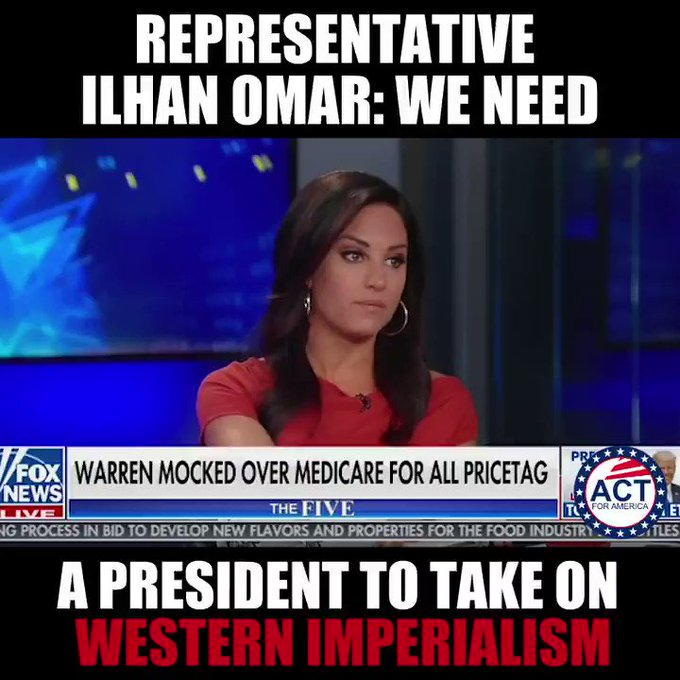 Neither Sanders nor Omar try to stop the chanting, although it could be heard over their speeches.

It was predicted by John Harwood of CNBN last year that “any serious Democratic candidate will make a point of shutting down” these kinds of chants aimed at the POTUS.

According to Fox News, “Omar’s endorsement was a break from the rest of the state’s delegation of Democrats, which endorsed Sen. Amy Klobuchar’s more moderate campaign. It also constituted a youthful shot in the arm for Sanders’ left-wing presidential bid, which has remained competitive with Joe Biden and Elizabeth Warren’s campaigns.

Omar said to the audience filled with residents from her home state. “Here in Minnesota, we don’t just welcome refugees — we sent them to Congress. Right now, achieving that universal dream feels more out of reach than it ever has in my lifetime.” said the Somali refugee turned United States Congresswoman,

While she didn’t say President Trump’s name directly, she did say that “The current occupant of the White House likes to talk about making America great. But, every action, and virtually every word out of his mouth, is an attack on the very values and ideals that make this country a beacon of hope for me and the people around the world.”

Take a look at the full video below:

Omar also claimed, incorrectly, that Trump said that neo-Nazis were “very fine people.” The comment Omar was referring to was taken out of context in my view.  What Trump was alluding to after Charlottesville were the free speech advocates who were also disgusted by the White Nationalists, and he was condemning the ‘Antifa’ who were also antagonistic, bad actors, at the deadly march.

“These are values that have been enshrined in the Universal Declaration of Human Rights for decades,” Omar insisted, speaking of the United Nations document. “But, here is the cold truth: We can’t achieve any of these goals if we don’t build a movement that is representative of all of our aspirations, all of our pain, and all of our shared trauma,” she continued.

Omar said of Sanders, “I am proud to stand with the son of a Jewish refugee who survived genocide. The acknowledgment of pain and suffering is personal for both of us. The fight for human rights is undeniable. And when we recognize injustices of the past and present, whether it is genocide against Jewish people, Armenians or Rwandans or Bosnians or Native Americans or more.”

Omar’s distant for what America was, what our founding ideal are, shines through on the daily.  I am all for legal immigration, I think it is the people who know oppression and are hungry for opportunity that help make America great.  What we must guard against is importing people who are determined to bring the same failed ideologies which they are fleeing, with them.  I fear omar is in the later crowd.

OPINION of TNS – Once again, the Garbage Party proves its worth …

Our website is made possible by displaying online advertisements to our visitors. Please consider supporting us by disabling your ad blocker.